(42) The Split in Panini Religion 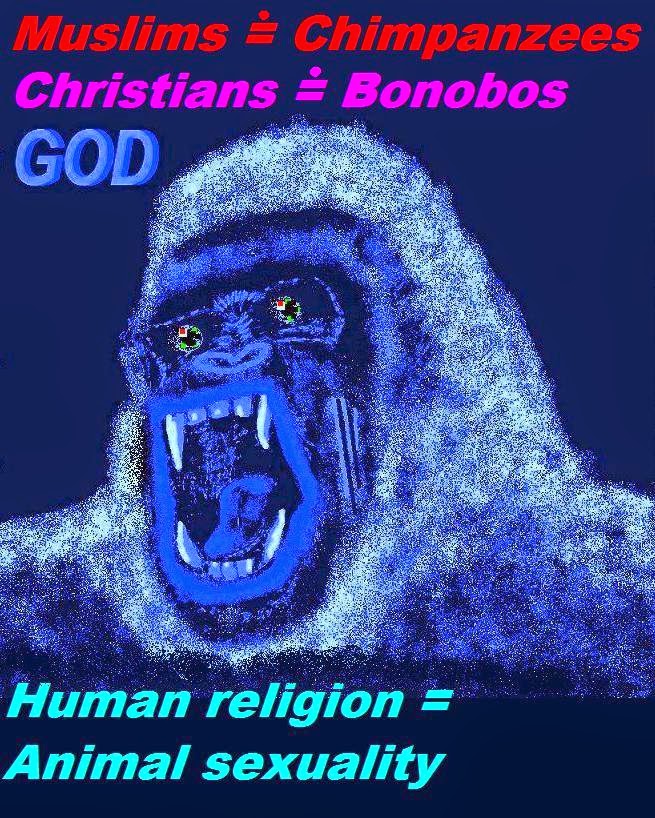 The degree of group permeability is the fundamental dimension of religion of higher mammals. Permeability is determined by the ratio of exogamy to endogamy: 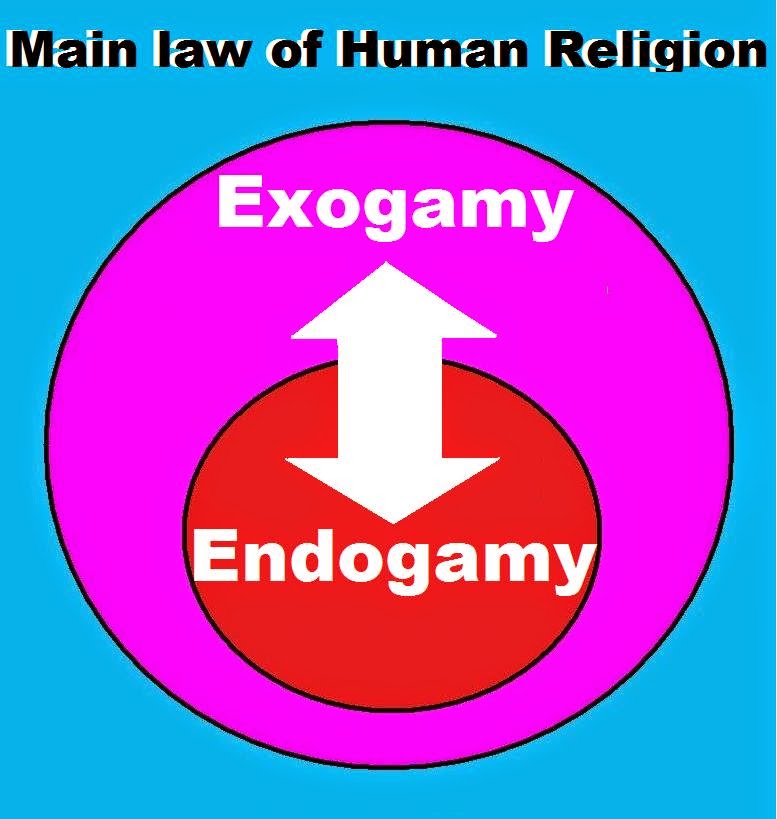 In mammal groups usually there is a patriarchal system in which males have control over females: 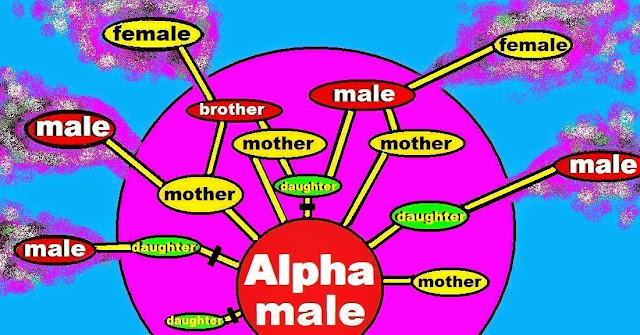 But in matriarchal systems females have control over males: 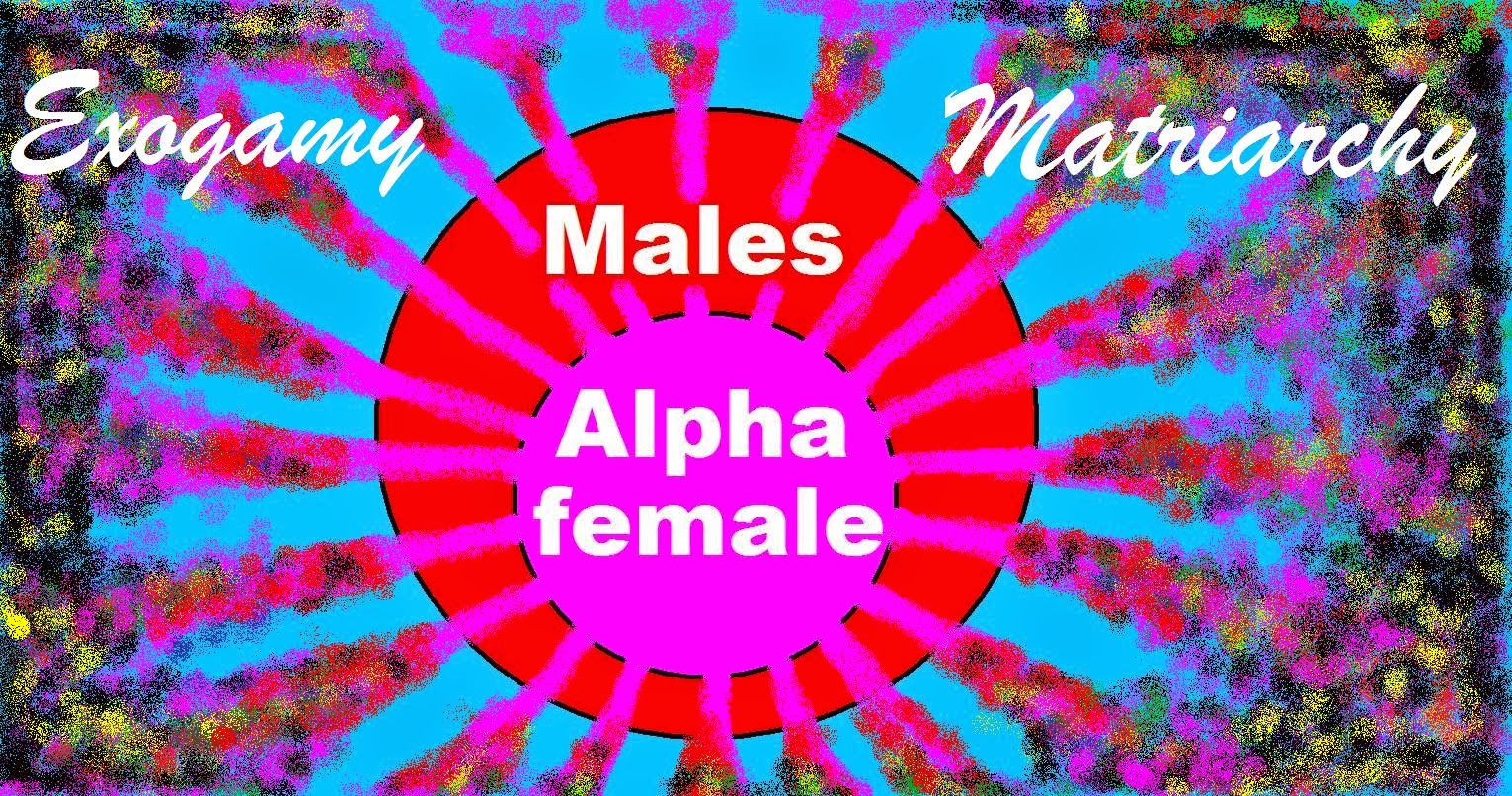 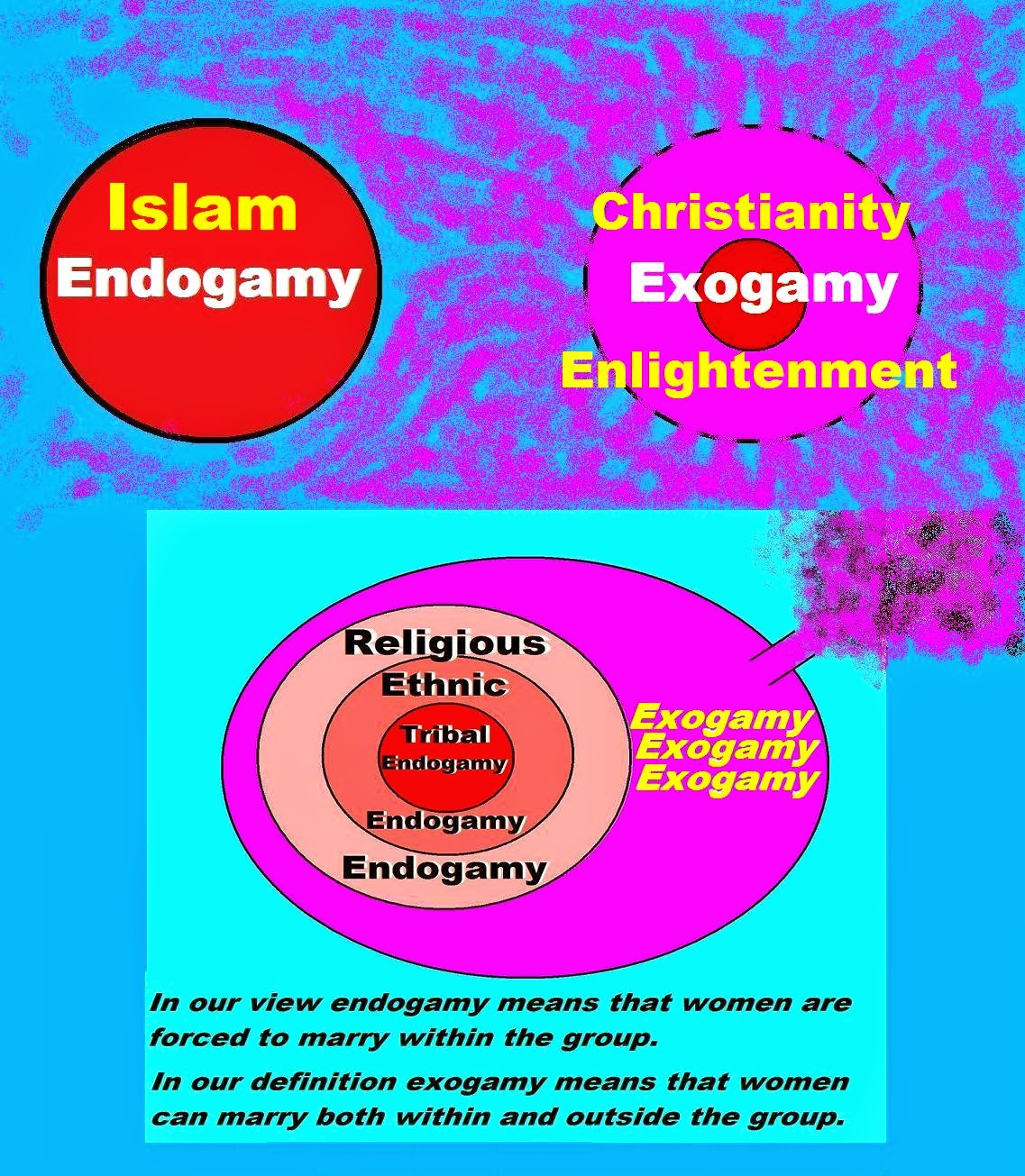 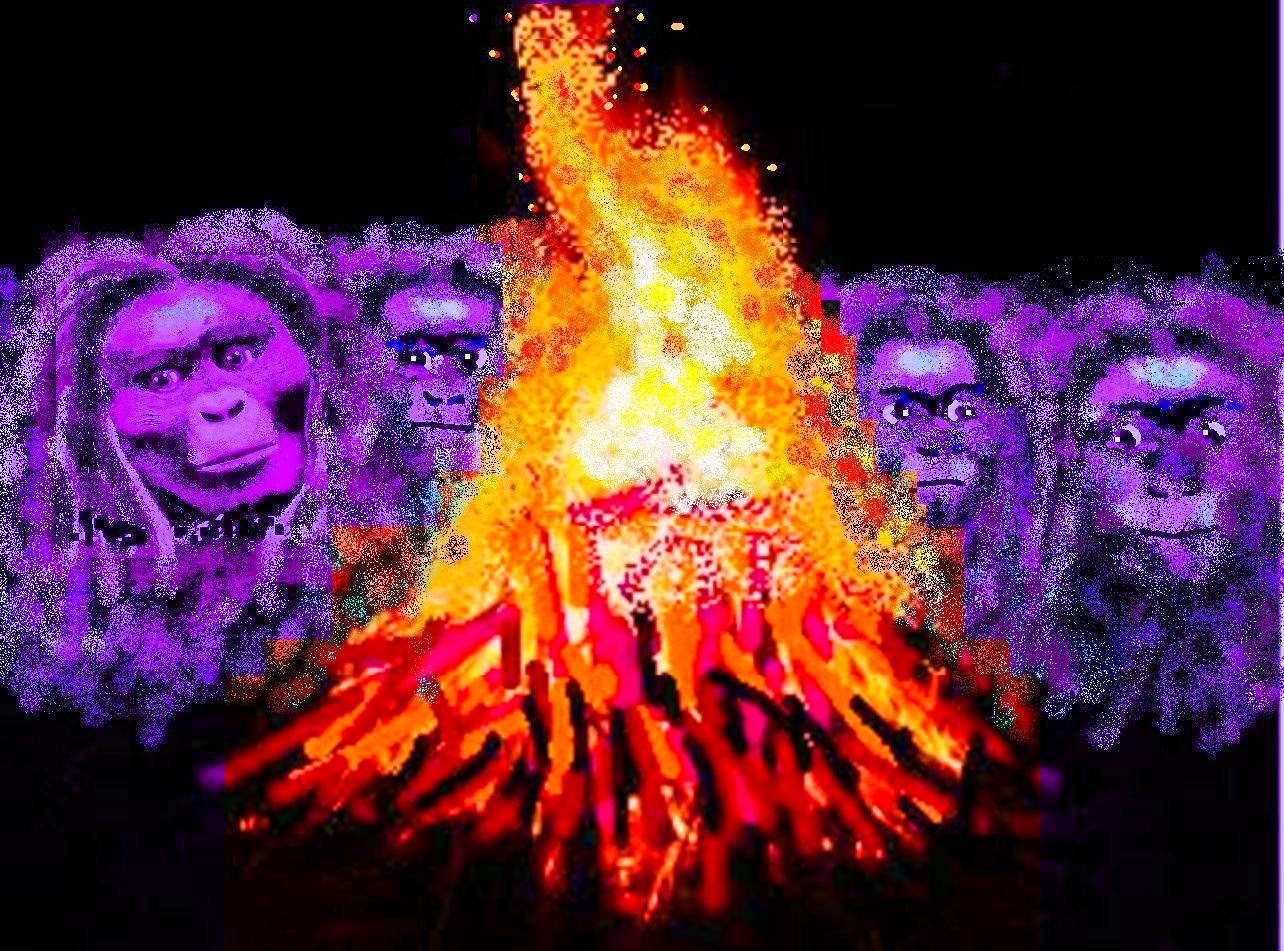 'DNA evidence suggests the bonobo and common chimpanzee species effectively separated from each other fewer than one million years ago.[22][23].The Pan line split from the last common ancestor shared with humans approximately six to seven million years ago. Because no species other than Homo sapiens has survived from the human line of that branching, both Pan species are the closest living relatives of humans and cladistically are equally close to humans. The recent genome data confirms the genetic equidistance.'. 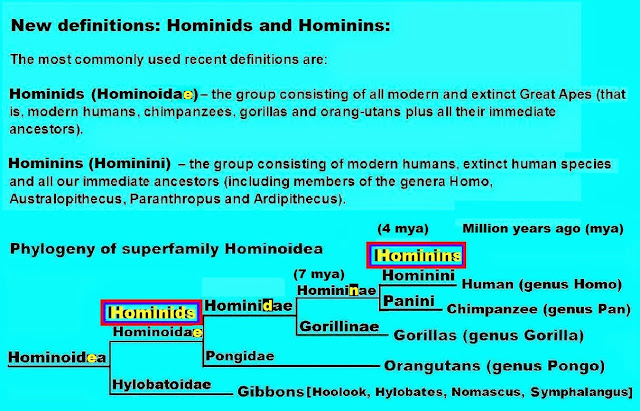 'Scientists such as Jared Diamond in The Third Chimpanzee, and Morris Goodman[21] of Wayne State University in Detroit suggest that the bonobo and common chimpanzee are so closely related to humans that their genus name also should be classified with the human genus Homo: Homo paniscus, Homo sylvestris, or Homo arboreus. An alternative philosophy suggests that the term Homo sapiens is the misnomer rather, and that humans should be reclassified as Pan sapiens, though this would violate the Principle of Priority, as Homo was named before Pan (1758 for the former, 1816 for the latter).'

The split in Panini Religion:

Chimps resolve conflicts with aggression and violence while bonobos peacefully settle their differences with a variety of sexual behaviors.


This is comparable with the split in Hominini religion: 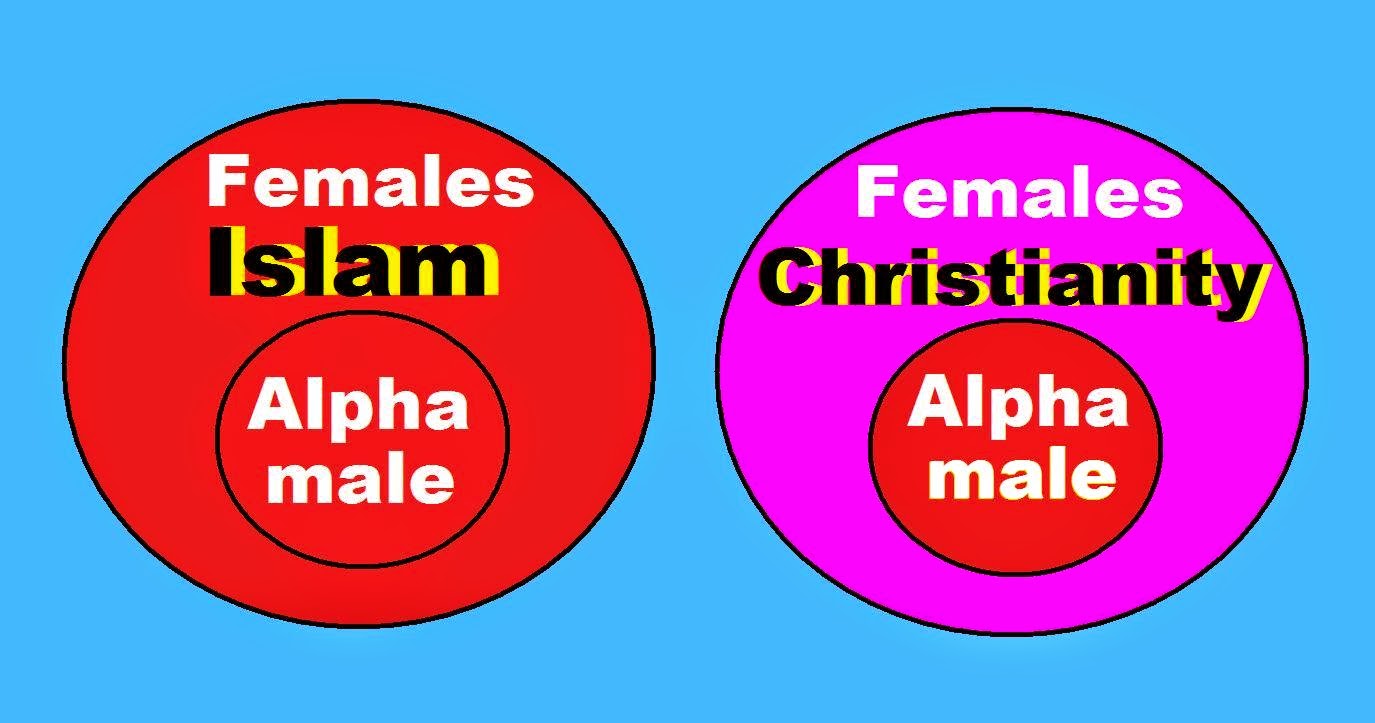 Muslims cherish violence as natural part of their Islamic doctrine, while Christians at least in their religion seek peaceful coexistence. 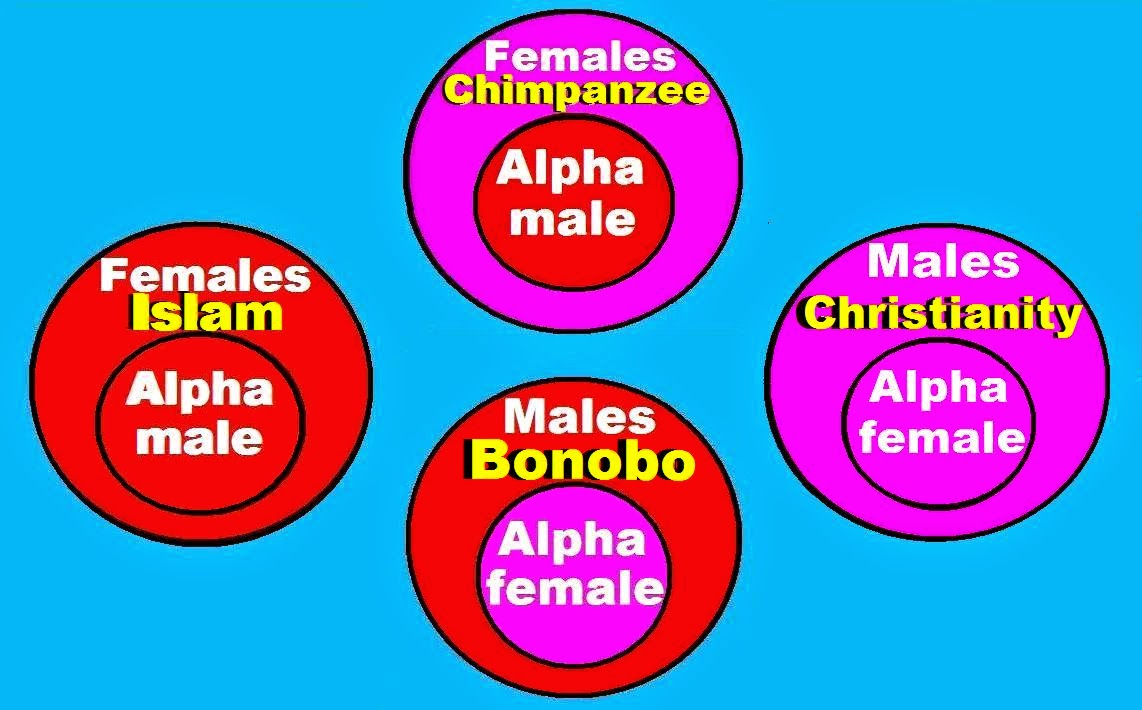 If all religions are pushed together on the permeability characteristic, a link evolves between animal sexuality and human religion: the Equal Sexual Roles (Eq.S.R.) rank order: 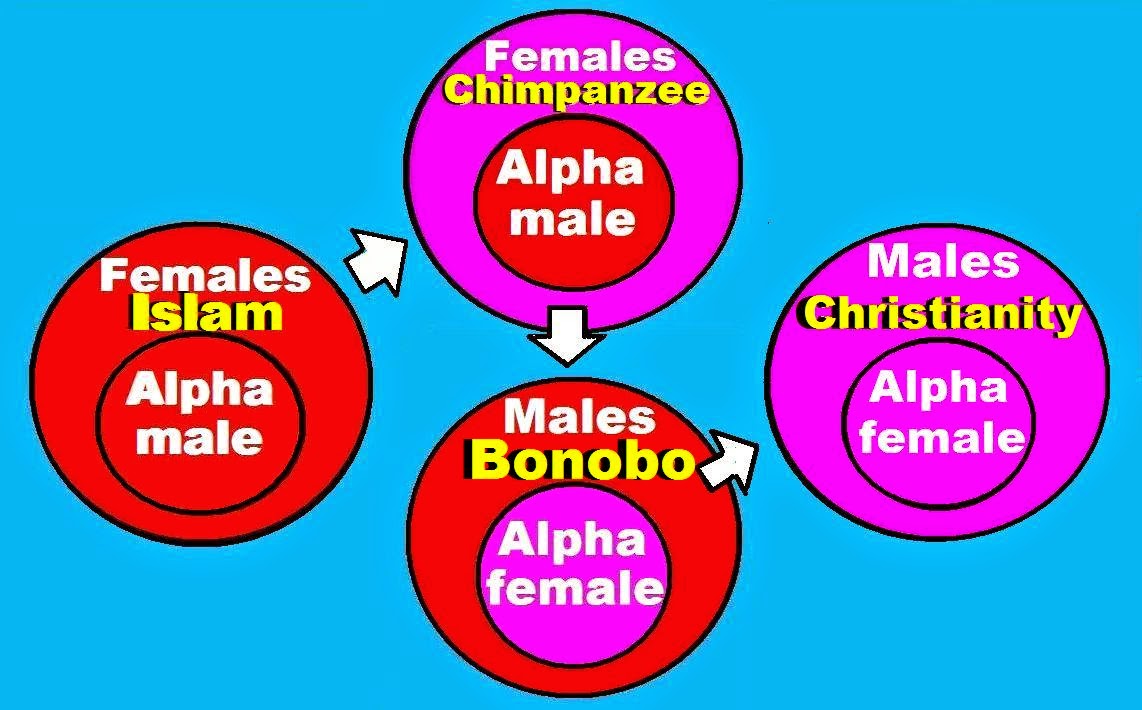 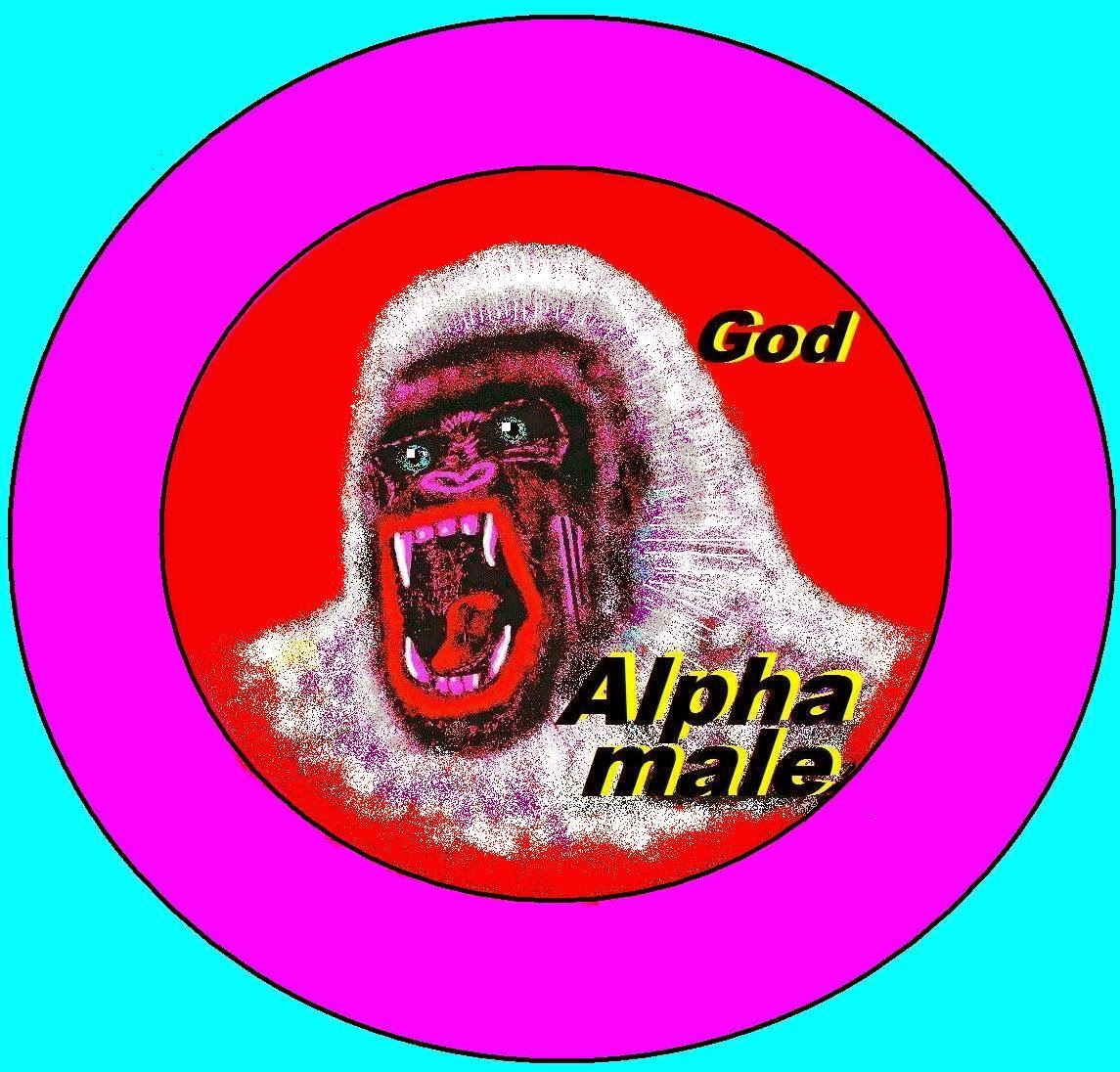 Assumption 1: God is a sexual ideal projection of higher mammals in the alpha male. He personifies the role of polygamous heterosexuality. 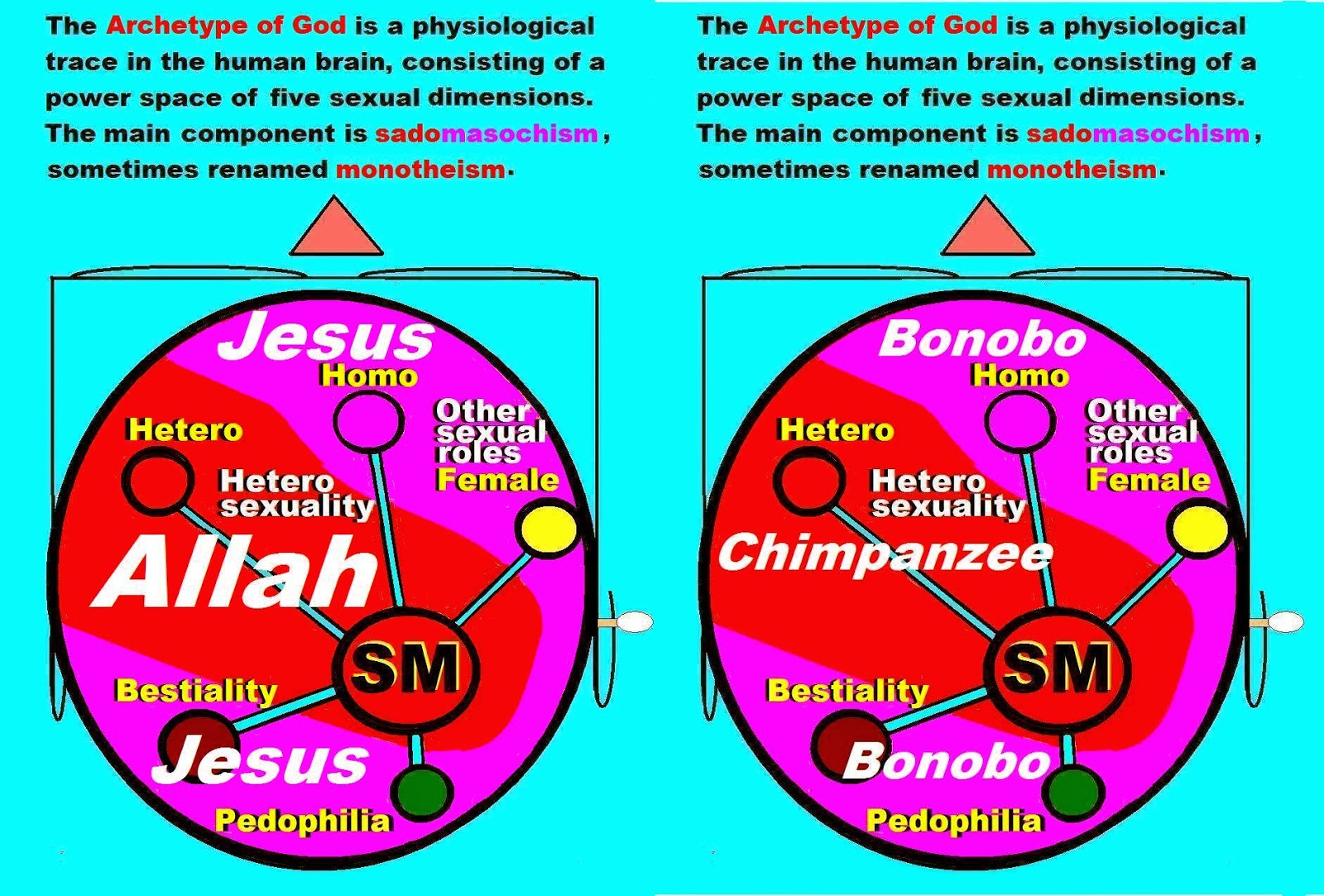 The permeability of a culture is determined by the degree of empathy with sexual roles, what is not the same as moral acceptance. When sexual roles - or gods - are considered equal their members are seen as equivalent subjects, apart from the moral acceptance of their behavior. 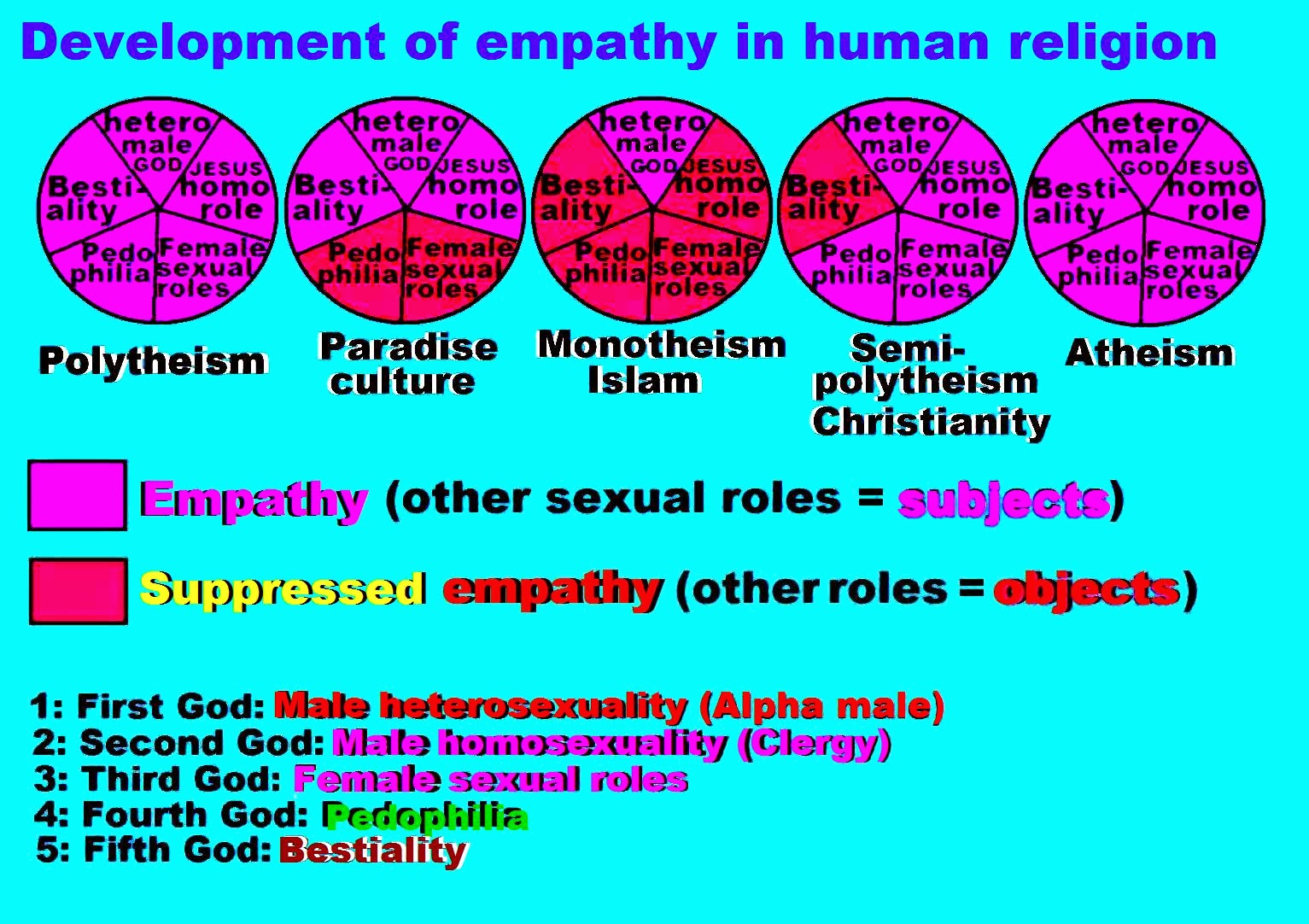 Islam discriminates between all kinds of sexual roles and chimp males oppress females as they wish, Christianity barely acknowledges homosexuality but bonobos consider all sexual roles as equivalent, except mother-son incest:

But Christianity can be understood as the transition from patriarchal to matriarchal religion. Jesus as feminized personification of the female role gives a clear indication to that purpose. This means that Christianity also can be seen as an alpha female society developing towards polytheism, towards total individualism. Which means Enlightenment - with a much more turbulent religious evolution ahead -, eventually will surpass the emphatic experience of sexual roles of static bonobo culture.

In mammal groups, religion is universal. On Eq.S.R, the split in Pan religion is in reasonable agreement with the caesura of Homo:

Other sexual roles are pinched in monotheism, where the heterosexual God oppresses the population (Islam), while the opposite occurs in polytheism, where all gods are freely transformed into sexual roles (Greek gods). 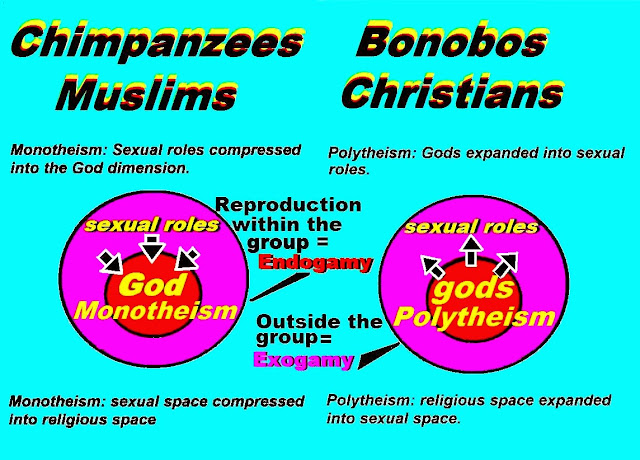 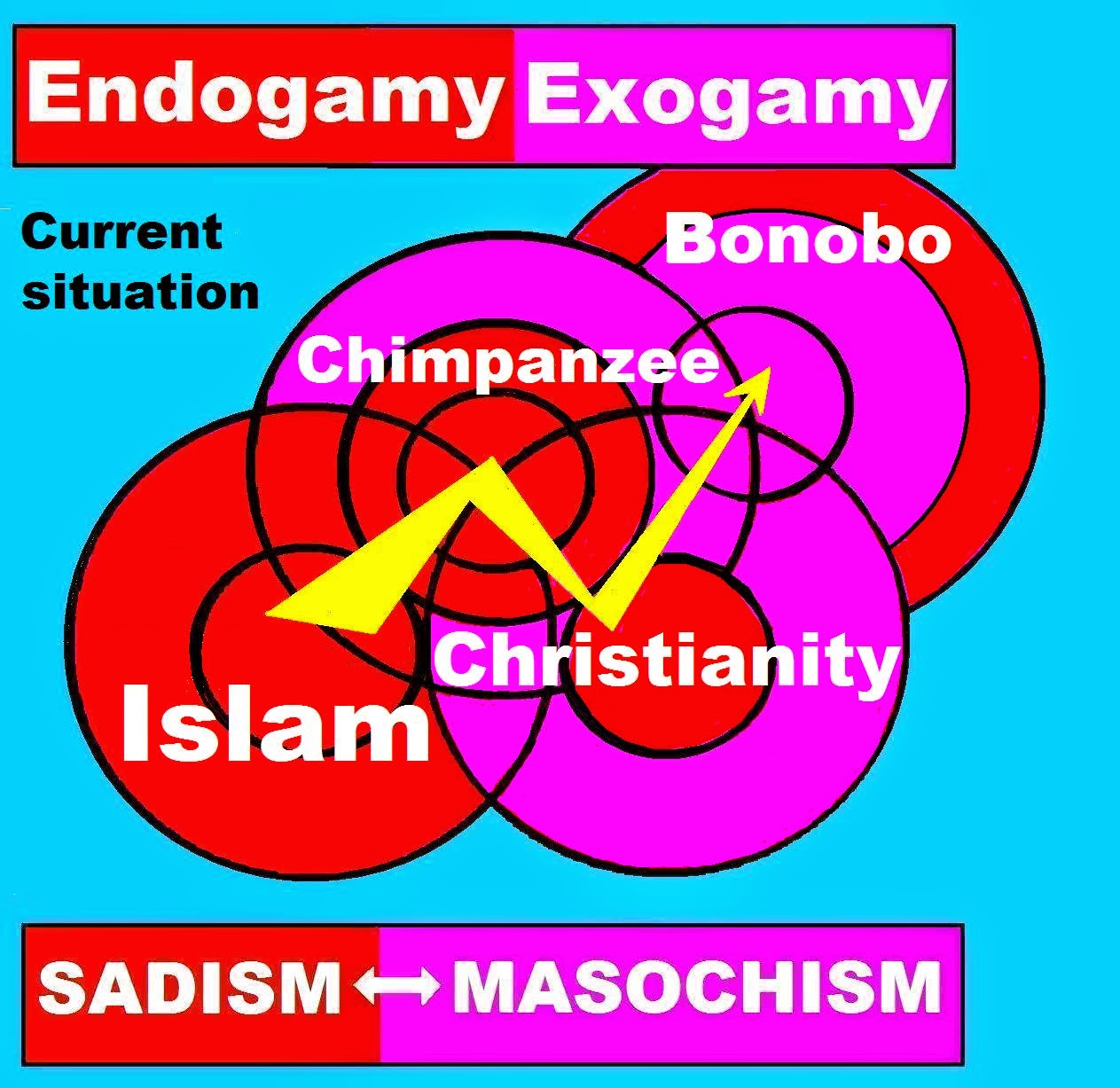 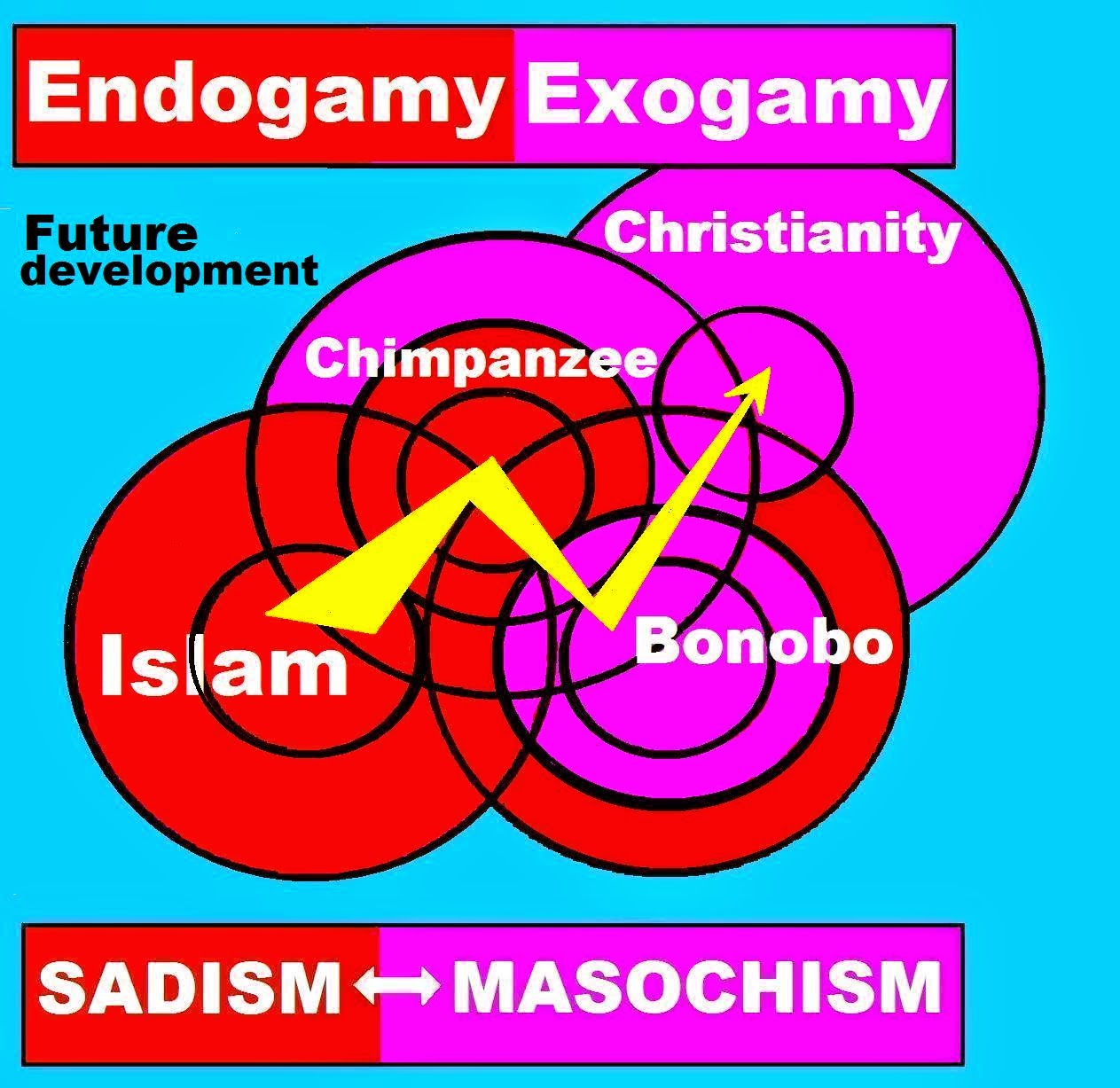 From animal sexuality we first reconstructed the basis of human religion and then with our vast knowledge of human processes we combine both types of sexuality on one super dimension.

First the evolution of human religion: 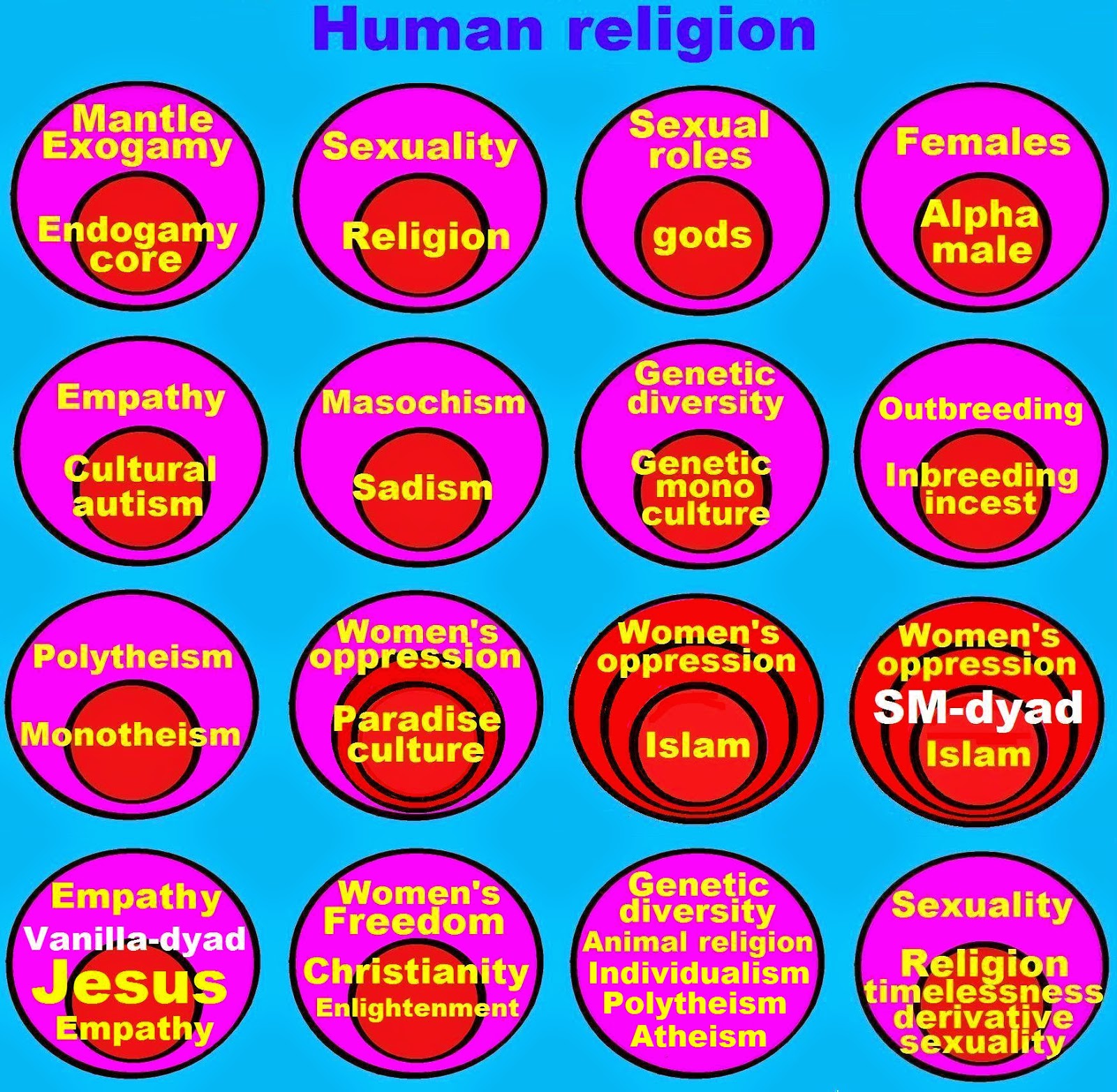 From here we infer there are no substantial differences between subspecies of Homininae on our main dimension of religion: 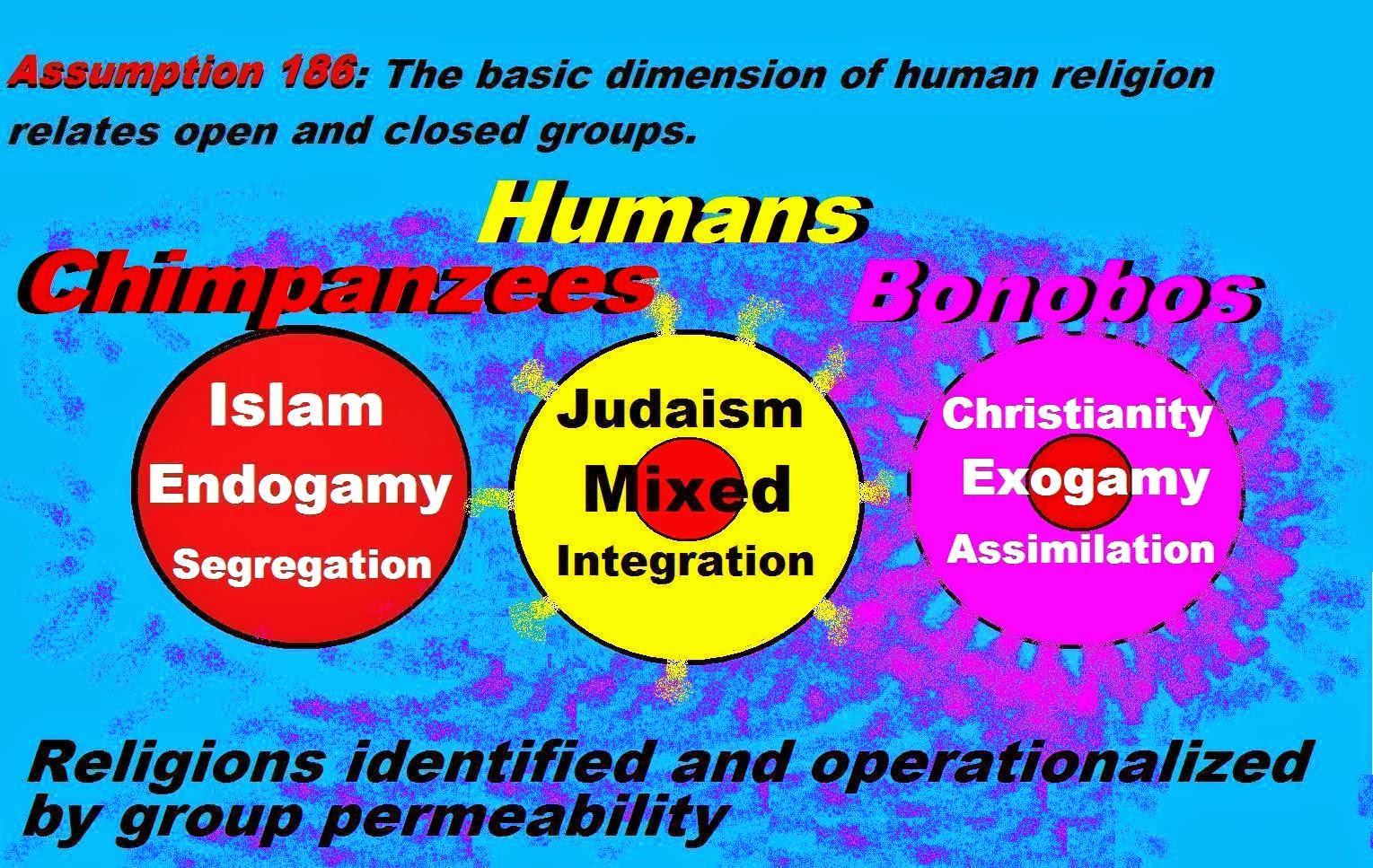 And now in retrospect we understand the animals from the basic dimension as follows:

Bonobos are renown for their sexual appetite. Common chimpanzees can become angry or violent, but bonobos defuse any such situation through sexual pleasure. They also greet and show affection to each other through sexual stimulation. Common chimpanzees do not engage in recreational sex, and mating only takes ten or fifteen seconds, often whilst eating or doing something else. Friendships and emotional attachments have no bearing on with whom a common chimpanzee mates, and a female in heat will generally mate with several males, who sometimes patiently wait their turn directly after each other. Humans experience sexual pleasure, like bonobos, however even sex for reproduction only takes much longer and requires more effort; long-term partnerships naturally form as a result. Unlike humans, chimpanzees have no concept of sexual jealousy or competition, as they do not take long-term partners. 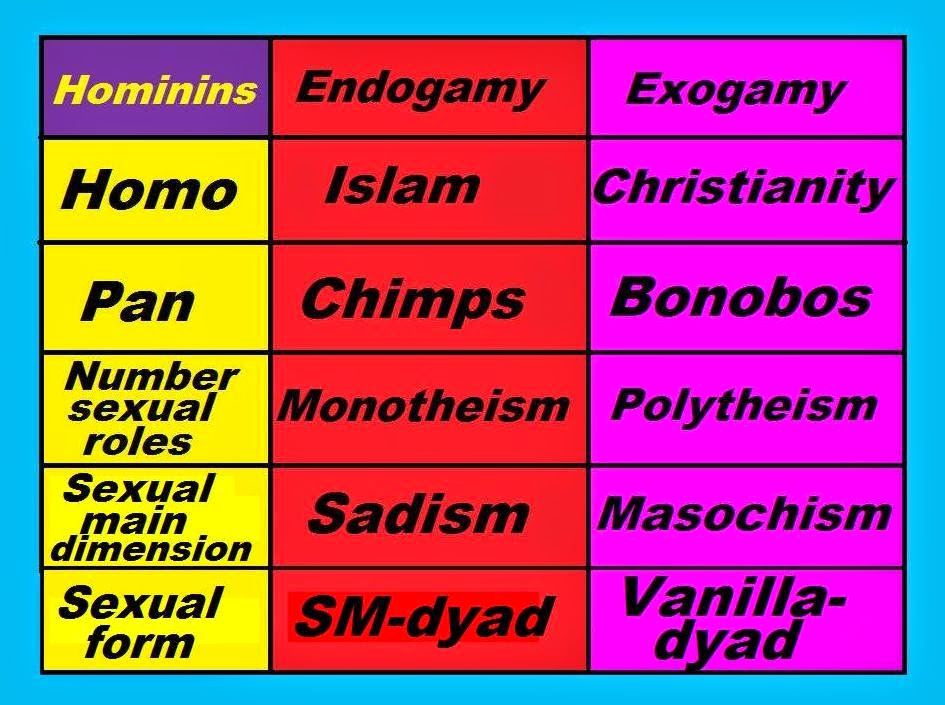 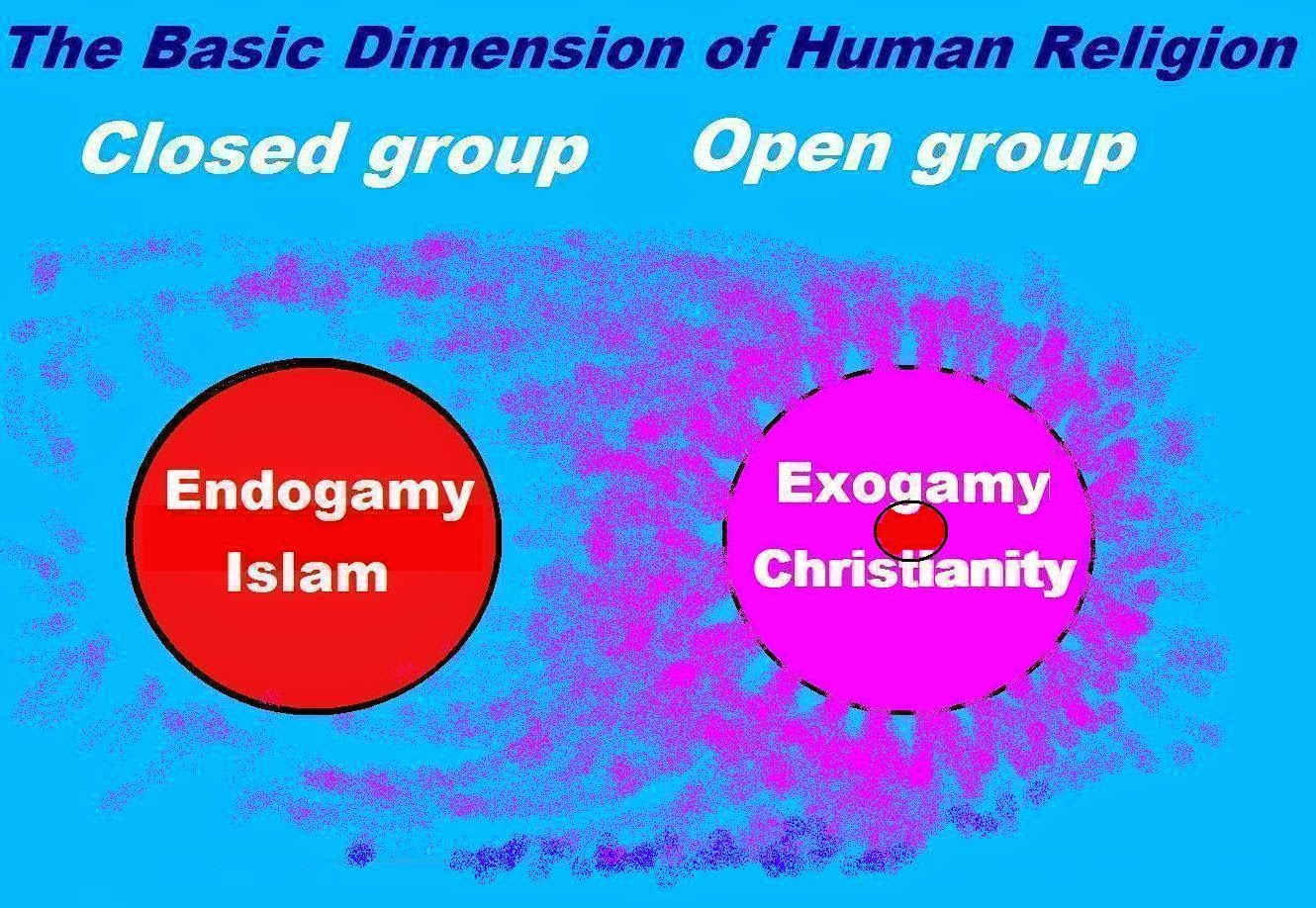 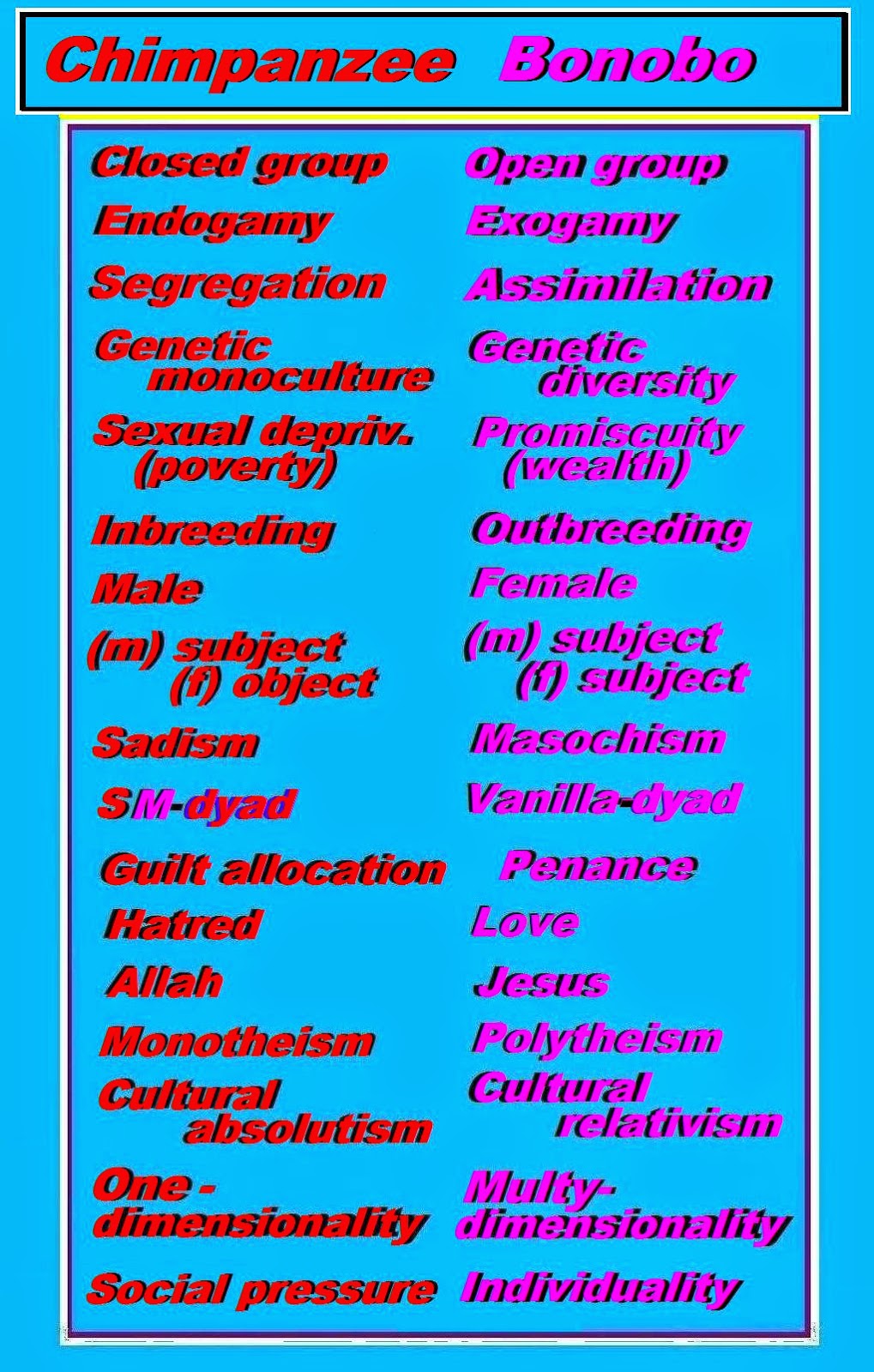 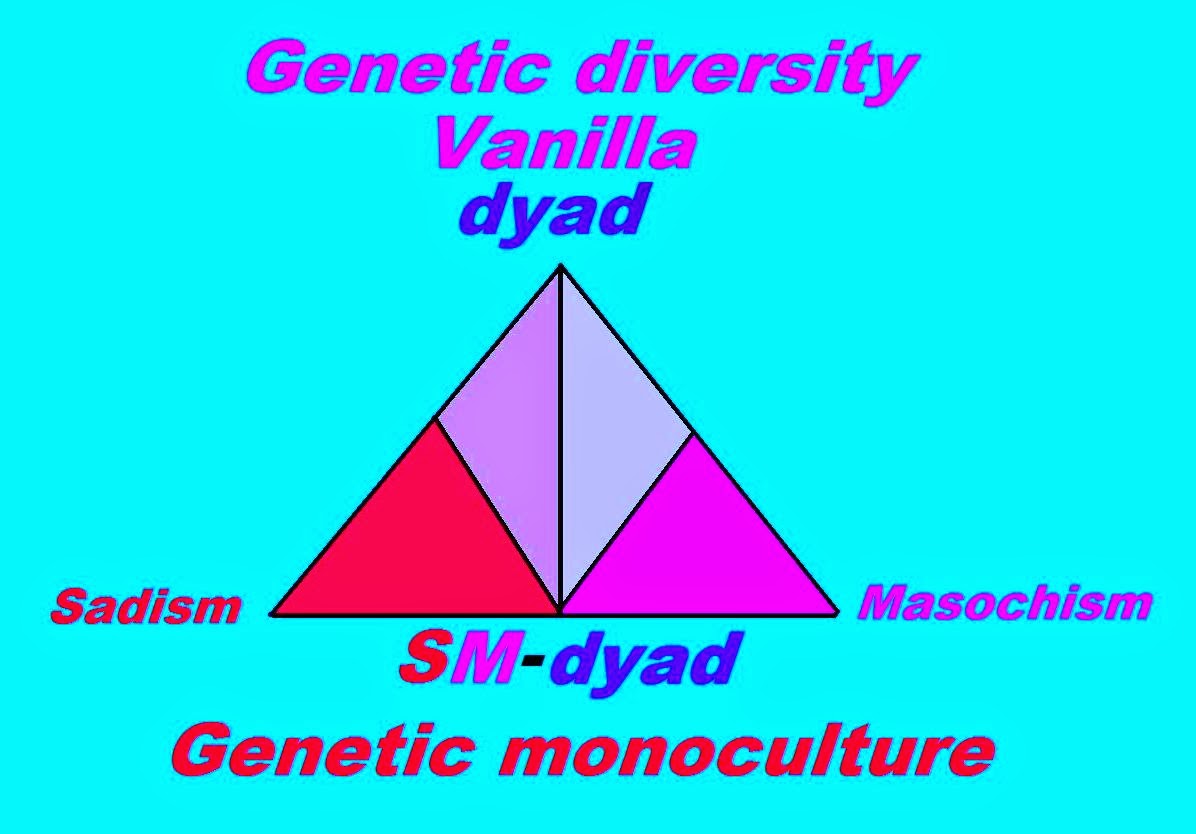 Homininae religion, state of the art: 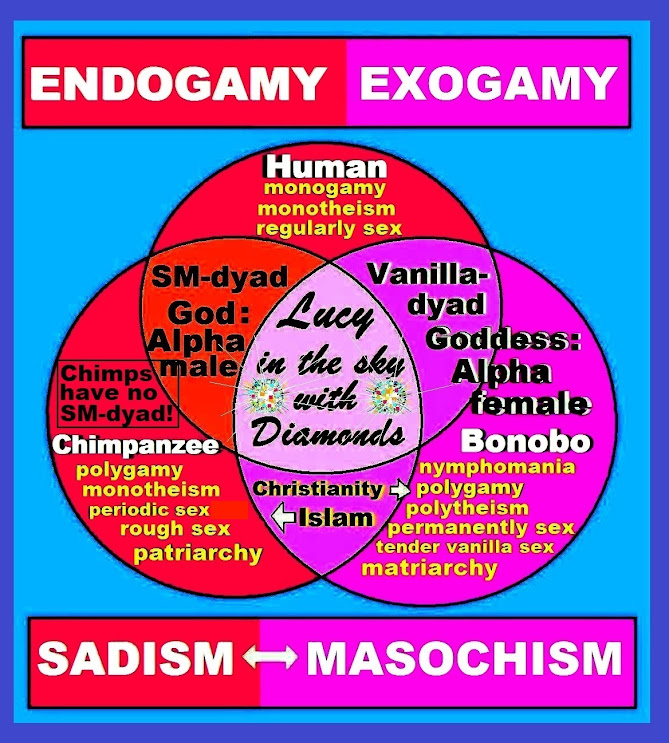 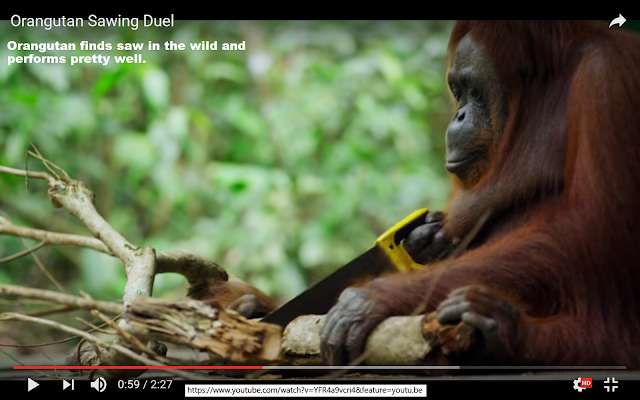 This work is licenced under a Creative Commons Attibution-Non Commercial-ShareAlike 4.0 International Licence.
Posted by Basic Dimension at April 24, 2015